How about this heretical idea: Why not give the final exam on the first day of class? 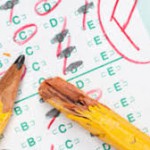 Research on pre-testing (testing/quizzing students on information not yet learned) shows that wrong answers on a pretest aren’t just useless guesses. These attempts actually change how we think about and store information, priming our brain for learning to come. This pretesting effect is the most potent when pretesting is followed with prompt feedback (i.e., the right answers).

A recent article in the New York Times Magazine by Benedit Carey discusses research by Elizabeth Ligon Bjork with UCLA’s Bjork Learning and Forgetting Lab finding that pretesting can raise performance on final-exams by an average of 10 percent.

How is it that students can study – read, highlight, memorize information – open an exam and see material they studied and still bomb? Students are easily duped by misperceptions of fluency: if information is easy to remember at the time of studying, it is well learned. This fluency illusion (another illusion of competency) leads to a belief that the information has been learned to termination of study.

The best way to dissipate the illusion is testing (not just “for a grade” summative testing), but testing yourself by trying to recall something from memory without a cue. Testing as study. Testing itself becomes an introduction to what students will and can learn, instead of final judgment on what they didn’t.

The (bombed) pretest drives home the information in a way that studying as usual does not. We fail, but we fail forward.

Benedict Carey is also the author of “How We Learn: The Surprising Truth About When, Where and Why It Happens,” published by Random House, from which his article is adapted.